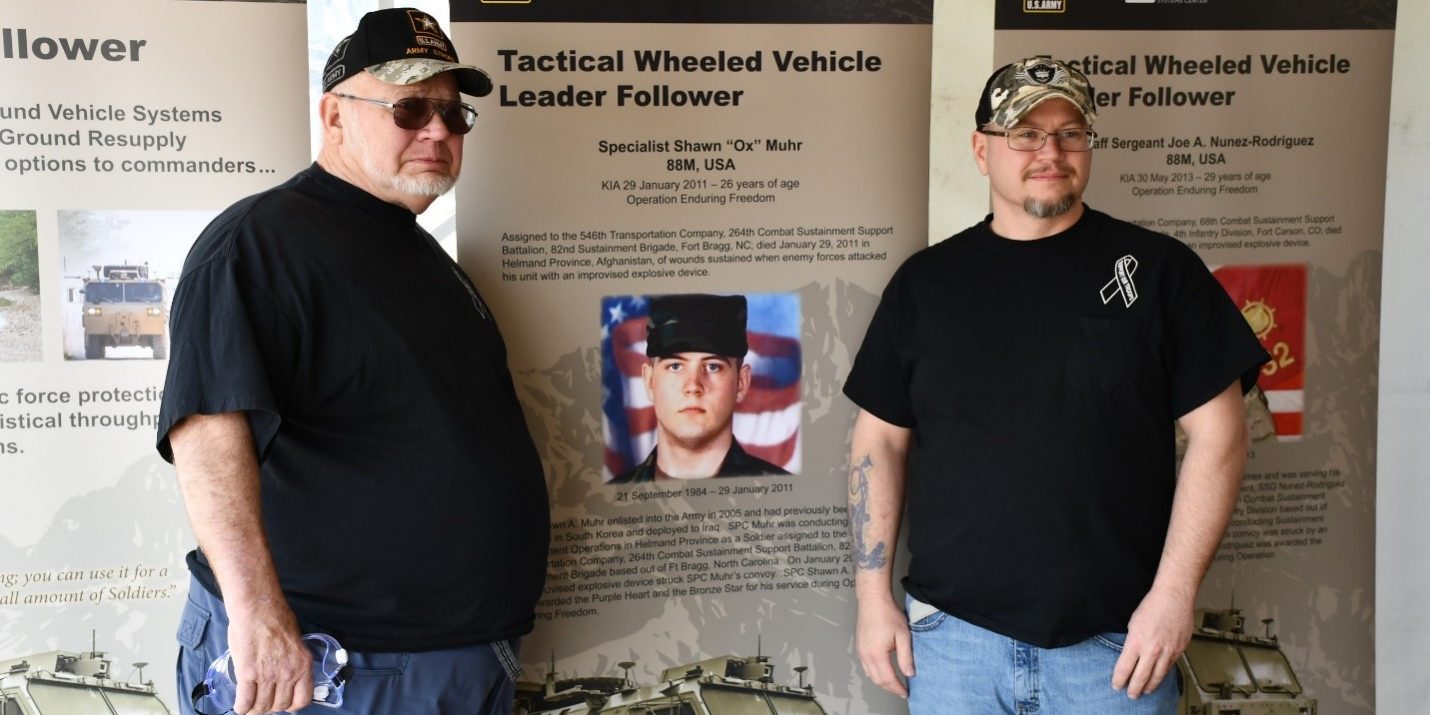 FORT BLISS, New Mexico—Motor transport operators, more commonly known in the Army as “88 Mikes,” drive the Army’s tactical wheeled vehicles that transport cargo on the battlefield. They are the backbone of the Army’s support and sustainment structure, and what they do makes them highly vulnerable to enemy attack.

Sixteen of these Soldiers who paid the ultimate sacrifice during Operations Enduring Freedom, Iraqi Freedom and Inherent Resolve were honored in a vehicle dedication ceremony April 10 here at the Westbrook basecamp adjacent to the McGregor Training Complex.

One by one, 16 experimental vehicles, each fitted with robotic appliqué kits developed by engineers at the U.S. Army Ground Vehicle Systems Center (GVSC) in Warren, Mich., were dedicated to the fallen Soldiers. To keep their memory, a black metal plate with the Soldier’s name and short biography was affixed to the inside driver door panel of each of the vehicles.

David Muhr, whose 26-year-old son Spc. Shawn “Ox” Muhr was killed by an improved explosive device in Afghanistan in 2011, represented fallen Soldier families at the ceremony.
“It means a lot to us that people are still thinking about these guys,” said Muhr, who attended the event with his son Aaron, himself a former 6-year Army Reservist. “Shawn was a good man, good at home, just all-around good guy.”

Muhr, a veteran wounded in action in Vietnam, said his son “loved” being in the armed forces. “He could have gotten out before his last deployment, but stayed in because he liked serving and had a lot of good friends in the military.”

This included Spc. Joshua R. Campbell, killed alongside Shawn in the same IED attack and also honored at the ceremony.

Master of ceremonies Maj. Andrew Scruggs had both Campbell and Muhr in his formation during his two years in company command at Fort Bragg, N.C.

“Those two individuals were among many who raised their hand to join my adjacent truck company commander in our battalion to go to Afghanistan to perform that mission, and they did it honorably. Unfortunately, those are two Soldiers that we couldn’t bring home,” he said. “I have waited many years to be able to properly honor them and their families. I’m very humbled to be a part of this opportunity to finally dedicate something in their name—to let everybody know we haven’t forgotten their sacrifices.”

Scruggs is GVSC’s assistant program manager for Expedient Leader-Follower, a semi-autonomous technology integrated on a set of tactical wheeled vehicles which for the first time will be used and tested in an operational unit—the 15th and 41st Transportation Companies. Soldier feedback is critical to ensure this capability is effective and efficient.

“Our real goal is to not only deliver an amazing capability for the Army, but also something that’s going to help protect Soldiers and have the potential to reduce the amount of Gold Star families we have in our formation,” Scruggs said.

As part of the ceremony, a demonstration convoy of semi-autonomous palletized load system vehicles rolled past attendees, and once coming to a stop, Col. Jered P. Helwig, from the Sustainment Center of Excellence, climbed from the passenger seat of one of the vehicles and strode up to the podium.

“The technology demonstrated today will be incorporated in the Army’s Next Generation Combat Vehicle as the Secretary of the Army recently stated that ‘autonomy is paramount and certainly critical’ to its development,” Helwig said.

“The memory of these Soldiers has inspired us to develop our own ways of waging war that minimizes exposure of our Soldiers to harm’s way.”

Leader-Follower provides the capability for a designated manned lead vehicle to lead a line of unmanned follower vehicles—up to nine of them—which are remotely operated by a single operator in the lead vehicle. This capability provides the ground commander options in the employment of Soldiers and the execution of sustainment convoy operations, potentially reducing the number of Soldiers exposed to attacks by the enemy.

“Leader-follower technology will even give us a greater sustainment throughput capacity, a means to self-secure transportation convoys, while giving the commander options for protecting Soldiers in a hostile environment,” said Don Overton, TRADOC Capability Manager for Transportation, and principal Leader Follower Combat Developer.

“The Leader-Follower System will change the way transportation units do business,” Overton said.

HMMWV winter tire program is off to a smooth ride
June 25, 2021
Upcoming Events