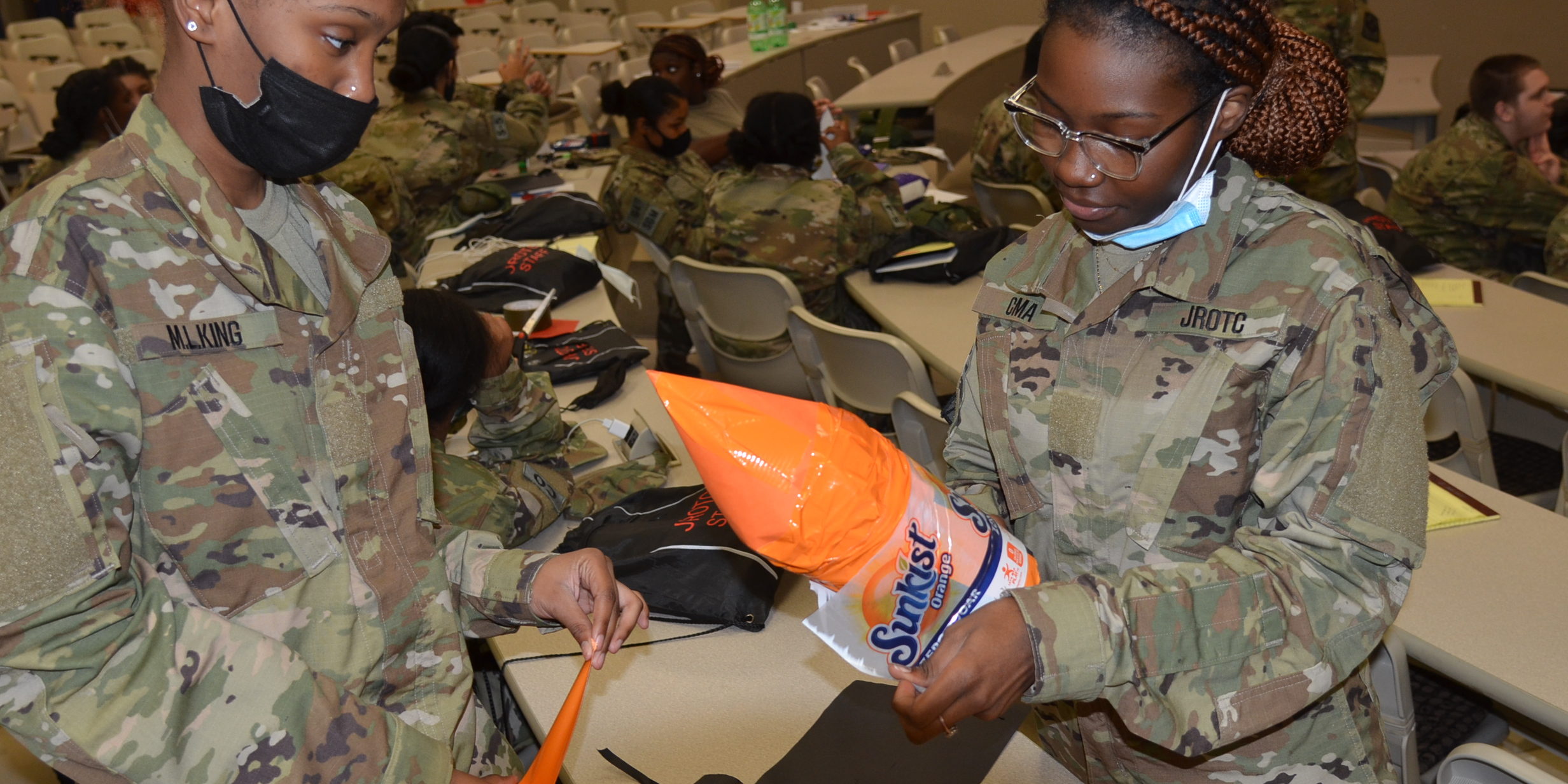 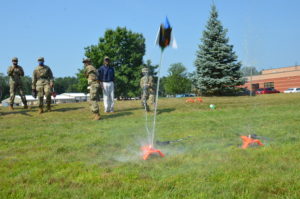 “This is just a wonderful thing for the kids, and we are so grateful that the GVSC and DoD STEM K-12 teachers come out and work with us,” said Maj. Patricia Overton, U.S. Army JROTC Instructor from Cass Technical High School in Detroit.

Many of the cadet students represented Detroit Public Schools with small budgets for summer camp activities. “We don’t have a whole lot of money at DPS, and just the idea that these teachers taking time to come out and work with the kids, it’s just great,” Overton said.

For many of the cadets who have home responsibilities during the summer including looking after younger brothers and sisters, the camp is an ideal set-up for putting maximum focus on their personal goals, said Lt. Col. Elizabeth Peters, who oversees the U.S. Army JROTC program for Detroit Public Schools.

“It’s just a great way to get them away from those responsibilities and focus on their education,” Peters said. “And with COVID this last year and a half, these kids need to be here right now.”

Peters said year-end metrics almost always show that STEM-day events have an impact on improving students’ chances of pursuing and getting into good colleges. “They usually have a higher GPA, higher ACT/SAT scores, and higher attendance and graduation rates,” she said. “They actually get more scholarships. These are all proven metrics.”

“We’re trying to build the leaders of the future,” Peters said. “That’s what we’re really here to do.”

A former high school basketball coach, Peters said she has always enjoyed her involvement with young people and recalls the positive influences of strong mentorship from her own youth.

“I’m also a foster kid,” she said. “I know how important it is to have great role models. When I see a young man or a young lady who comes in my program with just about zero confidence, and they walk out able to speak in front of a crowd and feel good about themselves, I know this program has an impact. We help build their self-esteem.” 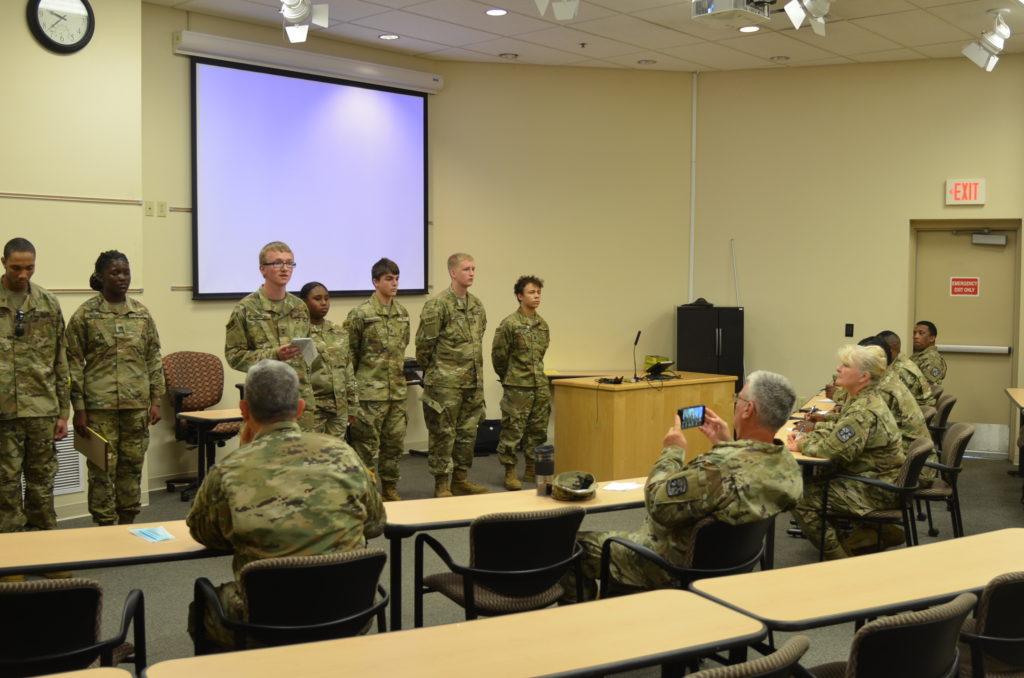 Case in point, JROTC Lt. Col. Aniyah Pouncy, from Cass Tech high school, has learned a great deal about leadership through her involvement in JROTC and has blossomed into the program’s top cadet.

“I’m the JROTC core commander for Detroit Public Schools district, and I’m the battalion commander at my school, meaning I oversee the whole staff.”

For the “Physics of Flight and Rocket Design” lessons, Mercer taught cadets how to design, construct and launch water rockets from 2-liter plastic soda bottles. In the process, cadets learned about thrust, lift, drag and gravity with regard to flight. During the rocket launch, cadet teams observed how stability played a role in the success of flight based on various nose-cone and missile-fin designs.

“When you create something like a rocket, in order for it to fly, it needs to be balanced—that’s the number one thing,” said JROTC CSM Alexander Dent, also a Cass Tech student, who plans to attend either the University of Michigan or Wayne State to study autonomous engineering. 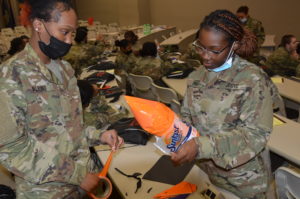 During the “Human Velocity” session, Ames-Powell taught mathematical equations which were applied to determining the miles per hour (mph) of walking and running by using time and distance data. JROTC cadets also used velocity calculations to compute the mph of a U.S. Army Ground Vehicle Systems Center PackBot robot.

“But STEM isn’t just about math,” said Adriana Rea, a cadet master sergeant who attends Cass Tech. “It’s about physics and engineering. And also I feel like today’s lessons opened up my creativity side,” said Rea, who plans to study architecture after high school.

For Ames-Powell that type of sentiment makes teaching summer camp all worth it.

“Knowing that I may have made a difference in the decisions students make with their careers and jobs, and that hopefully I provided a stepping stool for them is very satisfying,” she said.

Mercer, director of the Hoffman Planetarium at Oak Park High School, said he gets a charge out of seeing return students show up at camp.

“It’s always great to build relationships with the cadets and to see the fun and enjoyment they get out of doing the experiments,” Mercer said. “I think the biggest thing to remember is the mission is broader than just STEM and the military. It’s actually about trying to reach kids.”

Gregory Chappelle, who for several decades has coordinated DoD STEM K-12 educational outreach not only with JROTC cadet battalions but also with multiple Native American tribes including Ojibwa, Lac Vieux Desert Band, Hannahville, and Pokagon Band, as well as at depressed public school districts throughout Michigan, said he appreciates the lifelong relationships he fosters with students.

“I get to see these kids grow into professionals,” Chappelle said. “When they come back to see me and we talk, and they tell me the Army turned them on to their STEM careers, says it all.”

Chappelle points out that the GVSC DoD STEM K-12 program has been noted by other educators as one of the best in the country for reaching underrepresented and remotely located K-12 students.

Now more than ever, STEM is important to the future success of our nation and military. 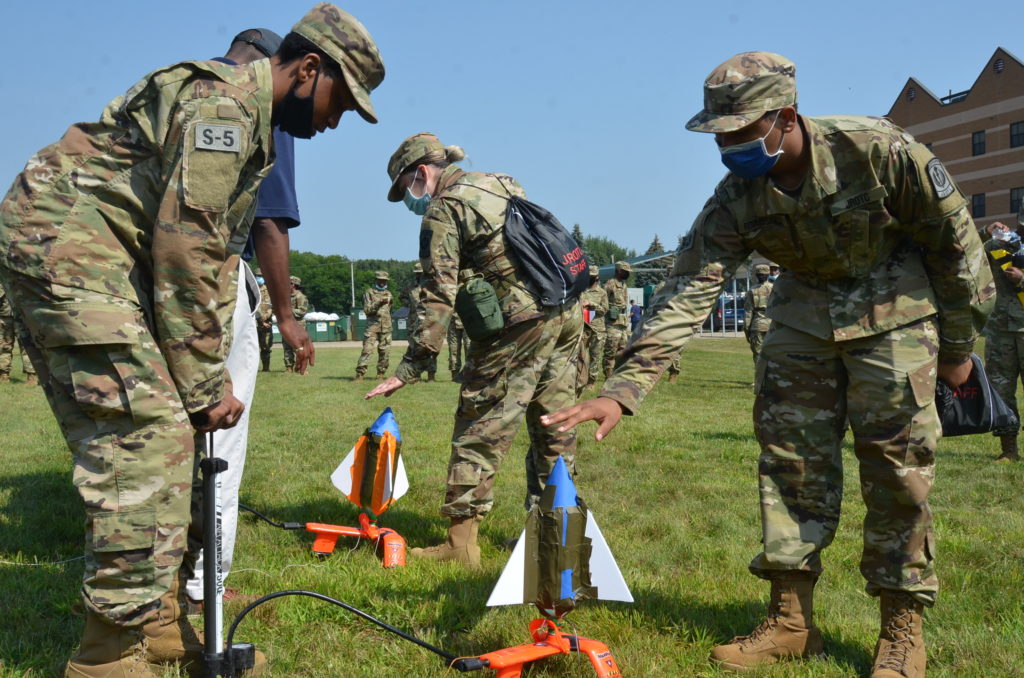 Earlier this summer, the Office of the Secretary of Defense released the DoD STEM Strategic Plan for FY2021-25, calling for a diverse and sustainable Science, Technology, Engineering, and Mathematics talent pool ready to serve our nation and evolve DoD’s competitive edge.

“The exceptional scientists and engineers in the Department of Defense, along with our industrial and academic partners, are the reason the United States of America is a world leader in science and technologies that are critical to our national security,” said Dr. JihFen Lei, Acting Director of Defense Research and Engineering for Research and Technology.

“The Department is cultivating the future STEM workforce by providing unique education opportunities to students and educators of all ages and across all demographics throughout the country. These efforts are vitally important to maintaining our nation’s competitive advantage, ensuring we are prepared for the ever-changing global landscape,” Lei said.