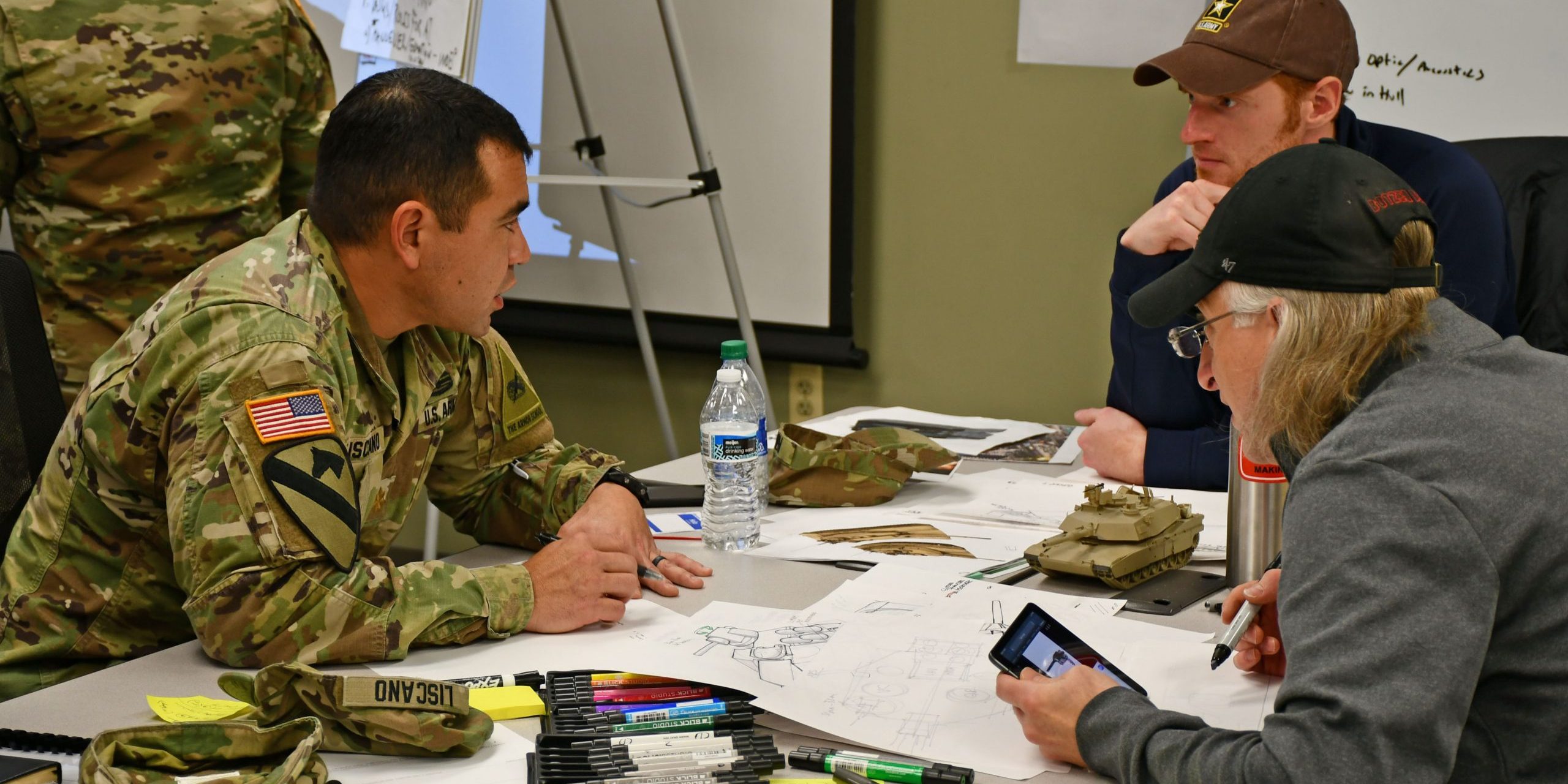 DETROIT ARSENAL, Mich.—Soldiers, engineers, and other armor experts came together here for the first in a series of Optionally Manned Tank Soldier Innovation Workshops to begin planning for the next generation tank.

For the 3-day workshop, the team held group discussions on what capabilities the Army’s next tank should have, gathering informed data points from Soldiers from the Fort Benning Maneuver Center of Excellence. Soldiers paired with a team of industrial designers and Subject Matter Experts from the U.S. Army Ground Vehicle Systems Center, with additional support from the Next Generation Combat Vehicle Cross Functional Team.

Topics of discussion ranged from crew size to unmanned and autonomous considerations. The team also explored levels of desired lethality, mobility, and survivability applied to a number of concept platforms.

“We have brought armor experts to the Detroit Arsenal from across the Army to start looking at what our next tank should be able to do,” said Brig. Gen. Ross Coffman, director of the NGCV CFT. “The Abrams is still the best tank in the world, but we need to start looking at what comes next. We need to start considering what an optionally manned tank will be able to do in a multi-domain fight.”

In its sixth year, the GVSC-developed Soldier Innovation Workshops support the Army in realizing enhanced technologies that result in near-term operational overmatch and future operating environment dominance. The OMT workshop brought senior Armor noncommissioned officers and officers from Fort Benning to provide expertise in how tanks maneuver across the battlefield and participate in a combined arms fight.

“These Soldier touchpoints are incredibly important to the modernization process,” said Coffman. “They provide the required expertise to the science and technology and acquisitions professionals, to get the equipment that will truly give them an advantage on the battlefield.”

SFC William Pulkinen, with the 194th Armored Brigade at Fort Benning, said the workshop experience has been rewarding and challenging.

“It’s exciting being a part of the creative process that’s going to open up people’s eyes to what Soldiers think is the kind of technology ground force tanks need to have 15 to 20 years down the road,” said Pulkinen, who has 18 ½ years in uniform.

“There’s no limit on future systems technology concepts and what engineers can implement on a future platform. The challenge is coming up with creative ideas that aren’t already in the works and trying to put yourself in the future and think about how a ground vehicle will operate in various types of theater environments.”

Following the Soldier Innovation Workshop, GVSC and the CFT will continue to execute a series of Soldier engagements, geared at building on the momentum of this workshop and continuing to inform OMT concept designs. These workshops will eventually lead to the development of virtual prototypes to be put in the hands of Soldiers in a gaming environment, to further confirm if the concepts align with Soldiers’ needs and requirements. Following these experiments, the Army will consider Soldier driven data, among others, to make a decision about if and how to replace the Abrams by 2023.

Over the years, GVSC’s Soldier Innovation Workshops have focused on topics including mobile protected firepower and arctic mobility. Some major outcomes of these workshops have been GVSC’s Virtual Window prototype for increased situational awareness and the Squad Centric Mounted Maneuver initial prototype vehicles.